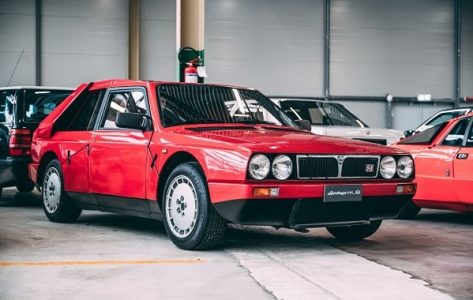 A new success for one of the rarest pearls of the historic collection managed by Stellantis Heritage: the Lancia Delta S4, one of the last existing models of the 200 produced between 1985 and 1986, it has won the “Ruoteclassiche – Best in Classic 2022” award in the “Youngtimer” category.

Held in the evening of November 30th, the awards ceremony took place at the prestigious venue of the Pirelli Hangar Bicocca and served as the final act in the annual competition created by Ruoteclassiche, a magazine that has been a benchmark for fans of vintage motoring for over 30 years. Divided into 12 categories, the aim of the awards is to acknowledge people, organizations, companies, associations, events and classic vehicles that have contributed to the cultural, social and economic growth of the classic motoring sector.

In the “Youngtimer” category, for cars produced from the 1980s to the 2000s, a sizable majority of readers of Ruoteclassiche chose the Lancia Delta S4 over its fierce competitors the Bugatti EB 110 GT “Parigi” and the Lamborghini Countach 25°. The full range of participants was much broader, but these three models were initially selected by a high-quality jury made up of 12 industry experts, of the caliber of Miki Biason, the last Italian driver to win a world rally championship, to name but one.

The Lancia Delta S4 has established itself not only by virtue of its design and its past performance (over 15 rally victories in the mid to late ’80s), but also because it was recently the subject of an article in the prestigious bimonthly Youngtimer, a magazine focusing on vehicles that are not yet historic, but have their own appeal even so and the potential to become collector’s cars within a few years. All this is a testament to the vitality and current relevance of the mission at the Stellantis Heritage department: as well as retrieving and safeguarding the historical heritage made up of classic cars from the Abarth, Alfa Romeo, Fiat and Lancia brands, it also aims to leverage and disseminate the values of these brands, all of which have made automotive history.

At the awards ceremony, Roberto Giolito – Head of Heritage – said: “Receiving this prestigious award is an honor for us, for how it acknowledges the effort made by our organization to spread knowledge of the historical heritage of our glorious brands, as widely and with as much conviction as possible. In this specific case, we are also talking about an extraordinary car like the Lancia Delta S4, which has contributed so much to the creation of the myth of Lancia’s unbeatability in motorsport”.

The award-winning Lancia Delta S4 is one of the few survivors – in the road version – of the 200 produced by Lancia between 1985 and 1986. The car – designed to take part in Group B of the World Rally Championships – is powered by a 1759-cc four-cylinder twin-shaft mid-engine, doubly supercharged by a turbocharger and positive displacement compressor. Its four-wheel drive is always on, and its chassis structure consists of a reticular cage made up of welded steel tubes, with honeycomb panels in Kevlar and carbon fiber used in the bodywork. The car takes its name from exactly these features: the letter ‘S’ stands for supercharging, the number ‘4’ for its four-wheel drive.

The Delta S4 Gr.B immediately proved extremely competitive, and in 1986 won the Italian and European titles after taking victory in over 15 rallies, including in Monte Carlo, on the Costa Smeralda in Sardinia, the Mille Miglia, and the Targa Florio. Capable of a top speed of 250 km/h with a total weight of 966 kg and a torque of 45 Nm at 5,000 rpm, the Delta S4 was the first Italian 4×4 to be used in competitions.